Fly Fishing In The Surrey Countryside With Snow Peak

Words and Pictures by Jazz Noble

Spring sunshine, lake fishing and a campfire-cooked meal – we headed to the Snow Peak HQ once more, to get back to the basics.

The more I learn about the Snow Peak way of life, the more natural it feels. And, that – I’m sure – is entirely the point.

They call this way, ‘Noasobi’, and it’s all about people existing in nature. Literally translated as ‘playing in the field’, it’s that timeless joy you get from spending time outdoors.

When you live in the city, though, these experiences are harder to come by. Snow Peak know this, and – thankfully – offered us just the cure. Fly fishing in the Surrey countryside.

Much like the Snow Peak ethos itself, fly fishing encourages a slowed down, minimalist way of thinking. Your main focus is the water, the fish beneath, and how exactly you’re going to catch them. Beyond that, all else seems to fade away for a while.

Under the guidance of Matt at Frensham’s lake-laden Trout Fishery, the Blackleaf team and I got to learn about the unique intricacies of the sport, and how it quite literally replicates the behaviours and rhythms of nature.

Aside from your choice of rod, reel and line (which I’ll leave to the experts), a key decision to make, we learnt, is your choice of fly. These are the beautifully detailed lures that are hand-made to imitate different species of flies. Your choice will depend on both the time of year you go out in, and where exactly you’re going fishing. From green Buzzers and Damsel nymphs to Daddy Long Legs and Hawthorns; the array of choice is pretty incredible.

You can even choose whether you want to fish with a dry fly – flies that sit on top of the water – or a wet fly – flies (usually nymphs) that lie underneath. I hedged my bets on a Daddy Long Legs fly this time, and hoped for the best.

After many attempts, however, I was having no luck. As it turns out, even the way you use your rod needs to imitate nature. Matt showed us the different ways you can cast your line, and explained how both the speed at which you cast, and the way the fly is retrieved should mirror the fly’s real-life behaviours. For example, with a Daddy Long Legs, you’ll want to cast it out, let it sit for 15-30 seconds, and then retrieve it in a slow, intermittent motion. Delicacy, here, is key.

The fish are crafty too. Since Frensham Fishery mostly use catch and release fishing, the seasonally stocked fish start getting used to the lures and can often sense when to avoid the fly. To outsmart them, then, takes a lot of skill and practise.

As the hours whittled away, we eventually got into the rhythm of things, and after a few close-bites, Paul (Brand Manager at Blackleaf) caught the first fish of the day – a red and cream-spotted Char.

Snow Peak talk about the importance of sitting around fires, ‘as humans have done for millennia’, and this feels like one of those moments. It’s both intriguing and exciting, and strangely primal – like getting back to the basics.

After admiring this scaley creature, and its unique position in the circle of life, we cast a few more lines, caught one more fish, and then called it a day. The campsite – and a fire-cooked dinner – were calling.

Back at the Snow Peak HQ, they had the dream set-up constructed, of course, including the Takibi fire and grill system, an overhead tarp, and a huge range of cooking implements to choose from. 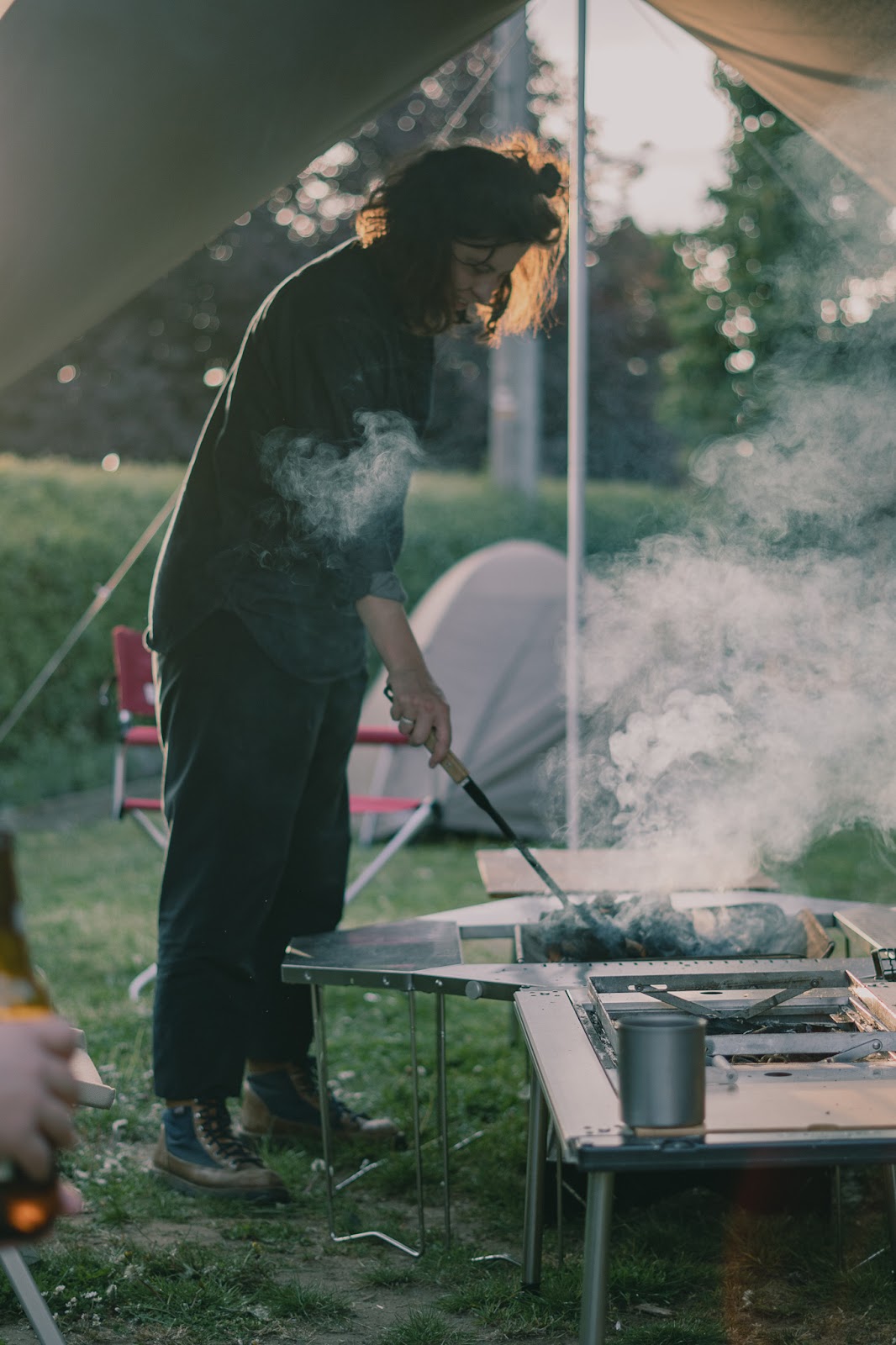 Emily (Sales Director at Snow Peak London) and Matthew (Wholesale Coordinator) had fittingly chosen Sukiyaki as our dish, which requires communal preparation at its core, and a steady flow of campfire beers on the side.

Each person had their own ingredients to prepare, whilst the hotpot bubbled away awaiting the veg and meats. Like a lot of Japanese hotpot dishes, the idea is for people to come together in their mutual love for food and kitchen (or fireside) table talks. And you can really sense this.

As the evening went on, that feeling of Noasobi became more and more apparent. In the midst of nature – or even just in your back garden – with good people and good conversation, time just…goes by.

Before you know it, it’s midnight, the night sky has cleared, and the fire’s still hot; but the tents are waiting. We headed across the field with Home & Camp lanterns in hand and slumped down for the night.

After waking to sun-warmed tents, and what sounded like the birdsong of Blackbirds, we ambled back to the HQ, and left the Snow Peak campsite behind once more.

There seemed no need to rush, so we ate breakfast slowly, and woke up steadily with the day. We even managed to check out a bluebell forest nearby before preparing to head back home.

Though these kinds of trips are relatively short-lived, you can feel the effects for much longer. From slowing down and taking in your surroundings to simply allocating more time for yourself in the great outdoors; playing in the field feels integral now more than ever. Even just a couple days spent outside, it would seem, is enough to rejuvenate the soul.

For more information about Snow Peak products, check out: blackleaf.com/snowpeak.